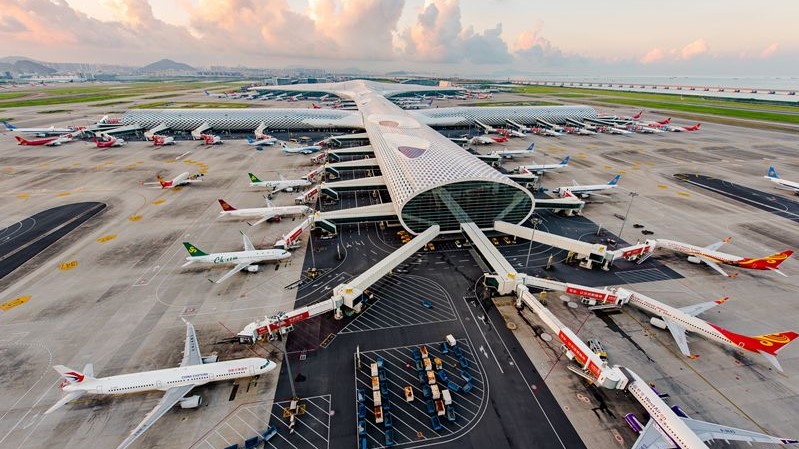 Located on the east coast of the Pearl River Estuary and 32 kilometers to the west of downtown Shenzhen, Shenzhen Bao’an International Airport is a mega international airport integrating marine, land, air and railway transport.

Shenzhen Bao’an International Airport boasts first-class facilities. Its flight zones, terminals and cargo warehouses cover an area of 7.7 million square meters, 451,000 square meters and 1.66 million square meters respectively. The new airport terminal, an energy-saving aesthetic success with strong practicality, was put into operation in November 2013. Comprising a main hall, a cross-shaped departure hall and a satellite departure hall, the new terminal rests on 195,000 square meters of land with a total floor area of 451,000 square meters, spanning 1,128 meters from north to south and 640 meters from west to east, and provides 62 contact stands and 14 remote stands with a maximum passenger handling capacity of 45 million. The airport currently has two runways. The second runway, which is 3,800 meters long and 60 meters wide, became operational in 2011. As a 4F airport, Shenzhen Bao’an International Airport can accommodate large-scale airplanes including the A380, the world’s largest airliner. Pick-up areas (outside the GTC)

The pick-up area of airport bus No.330 is located on the western platform on the second floor of the GTC. Passengers can buy tickets at the ticket counter near Door 17 and board the bus at the pick-up area.

Taxi stands can be found on the eastern platform on the second floor of the GTC. Passengers can access them by way of Door 13. 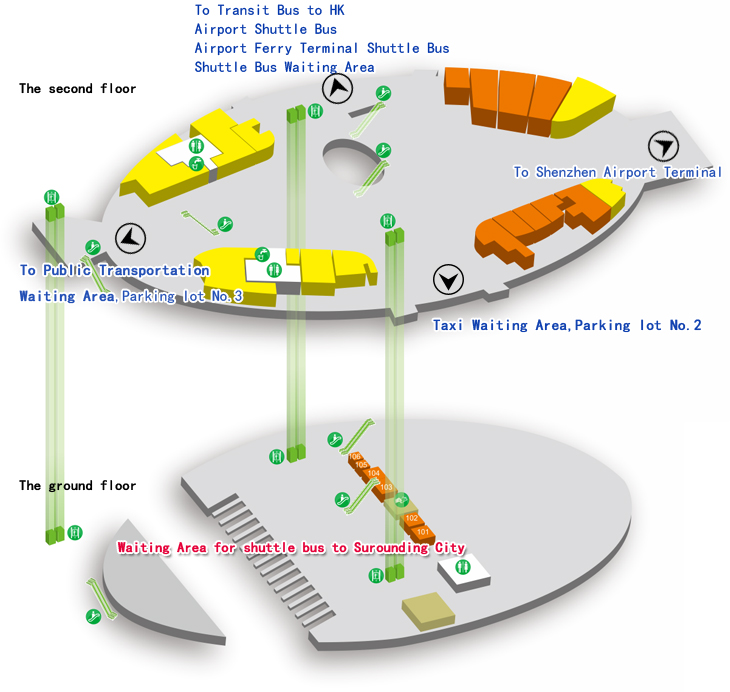 Pick-up areas (inside the GTC)

A public bus stop and the pick-up area of ride-hailing cars can be found to the south of the GTC. Passengers can access them by way of Door 15 and then take the escalator or elevator to the corresponding level.

Shuttle bus M416, which travels between the airport and Gushu station of Metro Line 1, is available at the public bus stop. Passengers wishing to take the Metro can catch this bus at the bus stop.

The bus stop for night-time public buses, coaches and inter-city buses is located on the western platform on the second floor of the GTC. Passengers can access the bus stop by way of GTC Door 16.

The entrance of Metro Line 11 is located in the GTC concourse and can be accessed via four elevators and two escalators.

(2). International flights and flights to Hong Kong, Macao and Taiwan

Take Airport Line 1 (Line 330) to the West Square of the Railway Station and transfer to the long-distance coach to travel to other cities in Guangdong Province.

(3). Fares: One-way ticket fares for ordinary carriages range from RMB 2 to 10, and for business carriages from RMB 6 to 30.

Note: The above information is for reference only and is subject to the Metro operator’s daily schedule.